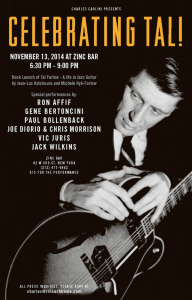 New York, NY – On Thursday, November 13, friends, colleagues and students will come together at New York’s Zinc Bar (82 West 3rd Street) to celebrate the life of the late jazz guitar great Tal Farlow on the occasion of the release of Tal Farlow – A life in Jazz Guitar, an illustrated biography that includes many never published photos from the guitarist’s private collection, written by Jean-Luc Katchoura and Michele Hyk-Farlow (Tal’s widow).

Farlow, whose soft-spoken and reserved manner belied his lightning-fast playing, was considered to be one of the leading jazz guitarists of his generation. A self-taught guitarist greatly influenced by Charlie Christian and Art Tatum, Farlow began playing professionally at the relatively late age of 22. In 1949, Tal joined the much heralded Red Norvo Trio, one of jazz’s first and finest chamber groups. Norvo, whose penchant for playing very fast, presented great challenges for Tal’s technique, and has often been credited for helping develop Farlow’s renowned speed and agility across the fingerboard.

In the mid 50s Tal played with the Artie Shaw Gramercy Five and performed and recorded with his own trio producing several notable recordings among them Autumn in New York (Columbia) and The Swinging Guitar of Tal Farlow (Verve). Then in 1958, Tal stepped out of the limelight and into semi-retirement, settling across the Hudson to a small New Jersey town painting signs (his true vocation), teaching and playing an occasional gig.

In 1981, Tal was the subject of a documentary by Lorenzo de Stefano entitled Talmadge Farlow. And in 1996 he was feted by his peers among them Herb Ellis, Remo Palmier, Joe Puma and Johnny Smith in a JVC Jazz Festival Tribute presented by George Wein and produced by Charles Carlini. Farlow died in 1998.