HighNote Records is proud to announce the August 30th release of Blue Dawn – Blue Nights, the new album from stalwart jazz trumpet artist/ bandleader  Wallace Roney. On his twenty-second recording as a leader, the Philadelphia-born musician is thrilled to be leading his band with the next generation jazz innovators: saxophonist Emilio Modeste, pianist Oscar Williams II, bassist Paul Cuffari, and his fifteen-year-old nephew, drummer Kojo Odu Roney. On Blue Dawn – Blue Nights, Roney is the icon to these up-and-comers and he augments this band by enlisting Philly guitarist Quintin Zoto and legendary drummer Lenny White. With exceptional sterling sound by engineer Maureen Sickler at the board of Rudy Van Gelder’s legendary New Jersey studio, the leader’s bold and bravura trumpet tones, are as vivid and vibrant as ever, with a resonance as riveting as it is radiant, buoyed by the dancing and dynamic drumming of Kojo and White, Cuffari’s bone-deep bass lines, Williams’ poetic and profound pianism, Zoto’s lean guitar lines and Modeste speaking no evil on sax.

“My music is uncompromising so I look for musicians who have an expansive understanding of what’s possible and who have the ability to play above that, but who are always cognizant of what’s going on around them,” Roney says. “I tell them ‘be true to who you are. Go all the way in, learn every part of what the masters have done, but let it come out you’.” 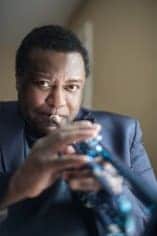 Emilio Modeste is already one of the world’s best young tenor players, and on this record, he unleashes serpentine-fired solos that encompass Dexter Gordon’s long, tall tones as well as Wayne Shorter’s and John Coltrane’s multiverse imagination. Oscar Williams II is a thirty-one-year-old, Kansas City blend of Thelonious Monk’s angular artistry and Keith Jarrett’s inspired improvisations. On his first interaction with the pianist, Roney recalls: “He had beautiful touch and a scope of understanding. He was shy but I could hear that innovative spirit in him–that’s why I hired him, and I never looked back” Next to take his deserved place on the bandstand is twenty-year-old Paul Cuffari. Affiliated with the likes of Mark Johnson and Enoch Smith, Jr. the youngster regards Paul Chambers and Ron Carter as two of the leading lights who have inspired both his foundation and development. Introduced to the New Jersey bassist by Williams, Roney admired his beautiful tone–“he had the fundamentals down, but he was also willing to step out on the ledge without sacrificing the thing that holds the music together: big, beautiful bass sound.” Last, but by no means, least is Kojo Odu Roney – a fifteen-year-old drummer of incredible ability and potential.

On Blue Dawn – Blue Nights, Roney made a conscious decision not to include any of his own compositions. Reflecting upon the track selection for the album, the bandleader wanted to “give the guys a forum to write and make a statement. I’ve always done that. They come up with something, and I might say, ‘let’s go here, or do this here.’ And by showing them certain things, it extends their knowledge of what can be done musically. And that’s what I do!” Indeed, Wallace Roney proves that being true always make the best leaders.

Wallace Roney has been a significant force on the scene ever since he emerged at Ali’s Alley at the age of sixteen with Philly Joe Jones. Roney has been featured on some impressive work with McCoy Tyner, Dizzy Gillespie, Elvin Jones, Chick Corea, and Ornette Coleman. Roney has secured a place in jazz history as a member of VSOP. As a member of Tony Williams Quintet, Wallace took on the responsibility of infusing the band with his fire and innovativeness and won the attention of his idol, Miles Davis. His long-standing association with the jazz icon culminated in the recording of the Grammy award-winning, Quincy Jones-conducted, Miles and Quincy Live at Montreux.

“I was fortunate to have learned from Miles Davis, Tony Williams, Art Blakey and Dizzy [Gillespie],” Roney says. “Horace Silver was another important person in my life who rarely gets the credit he is due and there was Woody Shaw, Herbie Hancock and Wayne Shorter and Clark Terry.”